On May 17, 1969, CPT David R. Crocker Jr. was killed in action in Viet Nam. His widow Ruth recounts her life with CPT Crocker in her book Those Who Remain. She details attending a reunion of her husband’s unit years later when she is invited to visit the

Viet Nam War Memorial on the Mall in Washington, D.C. with the Soldiers he led in battle. As she approaches and walks along The Wall, she relates memories of her David in various assignments and contrasts them with how she thinks combat veterans she is there with think about their memories of the war, each other, and their beloved commander.

I made a trip to The Wall a few weeks before reading Ruth’s account of her first time to the memorial. Unlike Ruth, it was not my first trip. As I walked along the increasingly tall black stones, the first thing that struck me is how rude some people can be. After suggesting to a younger man that his cell phone argument should be completed elsewhere, I returned my attention to those engraved slabs.

I found myself contemplating each name that caught my eye. I wondered how my brain selected some names to look at while skipping over others. My thoughts wandered to my own combat experiences. I mentally compared my experiences to those who fought in Viet Nam and eventually to every other war.

By now I found I completed enough steps so the stones were over my head. I noticed the reflection of my battle buddy on the surface of the stone, himself a combat vet in a different place and time from me or those whose names appeared before us. Like me, he would focus on some names and skip others. Unlike me, he remembered his childhood neighbor heading off to Viet Nam. He never returned. Today he searched for his neighbor’s name. As I remembered this visit and my other visits to The Wall, I conversed with my friend about his experiences at The Wall. After reading and considering Ruth’s description I started to realize why The Wall is such a powerful memorial.

There are several war memorials on the nation’s Mall. There are even more in the D.C. area. Many are large signifying the importance those wars play in history. Others are smaller, almost unseen and forgotten like many of our nation’s conflicts. While it is true these smaller wars and monuments are less known, they are no less important for those who served and those who died in those conflicts. Yet the Viet Nam Memorial is a most powerful monument to our fallen heroes.

The Wall is a powerful memorial because it allows people to project their own thoughts, feelings, and memories about war, their loved ones, and their experiences. 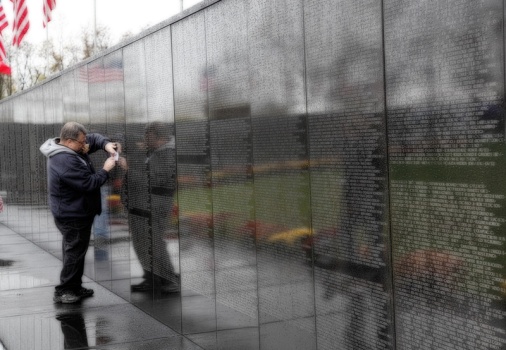 That is why a Gold Star Wife can accompany a veteran wearing a Combat Infantry Badge and feel connected. Each brings their own stuff, projects it on the tall, cold, black stone and The Wall, like a black hole, absorbs it all. Visitors do need not know any one person of the 56 thousand inscribed on those black shiny panels to project their stuff on to it. The Wall accepts everything just as the service members whose names appear on The Wall.

Other monuments and memorials of war are different. They have more conventional shapes. Each is a different size. Their materials and colors change across each individual monument, yet seem to copy from each other. Each of these attributes deflect projection. I cannot see my battle buddy’s reflection living or dead in those other memorials. Those memorials are about their war only. Thoughts, memories, and other reflections ricochet off their surface the same as a 5.56 does on hard surfaces. The Wall accepts them all.

The purpose of memorials are to allow people to remember the past, and make a connection with those who came before them. War memorials are more so by remembering the selfless sacrifice of those who served our country, defending freedom and liberty. In order to connect, one must develop an understanding of how those memorialized events affect their lives today no matter how long ago they occurred. 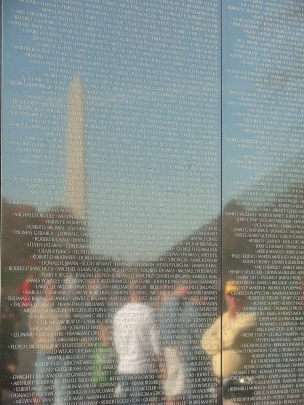 The Wall, even with all those names carved into the otherwise flawless surface is a blank slate, enabling all to search for meaning. Like the classroom blackboard each person can write the story of how events years ago changed the world and their place in the world. Each finds meaning.

The meaning they find may have nothing to do with those on The Wall. It may have not relate to Viet Nam or any survivors. Their meaning found in those dark slabs is unique to each individual. Meaning not only about the terrible cost of war, but also how death of loved ones hurt no matter the cause. They may achieve an answer to a random act of violence. They may develop a reason for suffering PTSD. The Wall accepts it all reflecting back each individual’s reality.

The other monuments are what they are.

It is hard to make the colossal statue of Lincoln something else. The size of the World War II Memorial is like the war, massive, so massive it is hard to take in all of it and understand, even after the passing of time.

The Soldiers marching at the Korean War Memorial are always on patrol, frozen in time, with little room for any other interpretation. Only The Wall absorbs our feelings and casts back what we need to develop understanding.

I’ve learned that sometimes the most important thing to understand is war is war and things sometimes happen for no reason. Tim O’Brien said often people expect a war story to end with a moral, but war stories are just war stories. Like war, they are what they are. Few end with a moral and fewer end happily ever after. Every war story is important to the teller. The teller may never know why, but something in that story changed their lives. Lots of things happen in combat. Only a few are remembered. The Wall captures each story, every memory. In time visitors may gain understanding of recollections from The Wall.

For those who experience war, detail of stories fade as time marches on. They never go away. This essay is about war and remembering war. In school we learn every story has a beginning, a middle, and an end. War stories definitely have a beginning, though the beginning may vary by the teller. War stories have a middle, the part where the action occurs. The end however can be tricky because there is always something that happens next. Maybe that is why few war stories have morals, they never really end. That is why we need memorials like The Wall, to help make sense of the senseless, and maybe that is why The Wall is such a powerful memorial. The Wall allows everyone to find their own sense in the confusion.

1 thought on “The Wall, A Powerful Memorial”